Do you like this bike?
2001 US Postal Service Pro Cycling Team's Trek OCLV Carbon Road Bike: Raced on! for sale
Current customer rating: 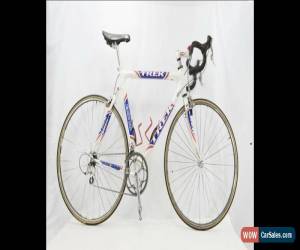 Iconic 2001 Trek US Postal Pro Cycling Team's OCLV Carbon Road Bike: Race Ridden!
Hello! Thanks for checking out this very special listing offered by Trips for Kids, nonprofit youth development program that takes underserved youth on guided trail rides and STEM-based Earn-a-Bike programs. Learn more in the "About Me" section under our seller name or at: tripsforkids.org.
This iconic bike was owned by the infamous 2001 US Postal Service Pro Cycling Team (2001 USOC Team of the Year), with Lance Armstrong, George Hincapie, Tom Boonen, Christian Vande Velde, Victor Hugo Pena, Levi Leipheimer, Viatcheslav Ekimov, Roberto Heras, and others. This bike may have been ridden in the Tour de France!
The bike was donated by gentleman from Marin County who worked with the US Postal Team owner, Thom Weisel, and also in support role for the Team. Mark Gorski, the Team Manager, gave him this bike as gift in appreciation for his work for the Team. He kept the gift in his garage for 18 years and donated it to Trips for Kids couple of months ago because of his appreciation for our organization.
The 2001 US Postal Team had fleet of bikes in the United States and Europe. We have no way of knowing which team member rode this particular bike. We spoke to many people that were involved with the US Postal Team in 2001 and they can't verify which rider rode this bike and where. But team mechanic from that year, Ralf Medloff, has verified that it was part of their fleet and had been raced on.
Ralf instantly recognized the bike when he visited Trips for Kids. He noticed that it came with both wheel sets (which are both Included in this listing), custom built, tied and soldered tubular "race day" wheel set, and clincher "training" wheelset. He also pointed out the stickers on the bike Cinelli on the stem, and Hutchinson Tires on the non-drive-side chainstay, both of which were 2001 US Postal Team sponsors. This bike is the real deal; Lance Armstrong rode bike just like this to win his third consecutive Tour de France!