Do you like this bike?
2014 Knolly Podium Size M for sale
Current customer rating: 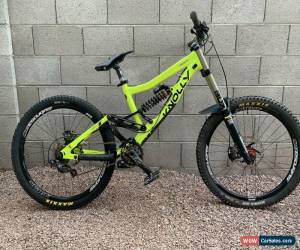 have recently purchased the pivot bearing kit which was $220 with shipping. doubt it is necessary at this point, but am anticipating being furloughed before May and intend to replace them with no change in asking price.
This bike has seen little use as lived in OH and took it to SnowShoe 3-6 times per year for years. It was stored for one year and ridden times this past year. bought it from someone in Chicago who custom built it and barely rode it. It has been very well cared for and is in excellent condition. The frame has been covered in paint protection film and also has carbon leather on the bottom for added protection. There is chip in the paint from rock flying up behind the seat tube. This bike glows in the dark. It is an awesome, fun park bike that jumps with ease. am only selling because my knee can’t tolerate riding aluminum frames anymore.
2014 Knolly Podium Size Medium 35.5 pounds... as is- Fork: Rock Shox Boxxer WC (Crowns, axle and right stanchion tube are 2010). Everything else has been upgraded to 2014 parts. Matching yellow decals. Serviced rides ago and was told seals were fine but should be replaced next service- Shock: Cane Creek DB Coil. 400lb steel spring. Wheelset: Hope Pro II red hubs laced to Spank Subrosa 30 rims. Setup tubeless. One small dent in rear. True- Front tire: Maxxis Minion DHF 3C maxterra 26x2.5 tread in good condition-Rear tire: Maxxis Minion DHF super tacky 26x2.35 tread in good condition- Race Face SIXC carbon I-Beam seatpost Race Face Atlas I-Beam saddle- Shimano Zee cranks- Race Face 36T Narrow-wide chainring- pedals: none- can include some Kona Wah Wah’s with some play in the left one only when pedaling upon request- Point One Racing direct mount stem.-Chris King headset: new with rides- Joystick Analog Carbon handelbars- Race Face Half Nelson Grips new with rides- Shimano Zee Clutch rear 10spd Derailleur- Rear brake: Shimano Saint M820 caliper and hose with Zee lever. Lever and brake pads new with rides-Front brake: Shimano Zee new with rides- Shimano Ice Tech 203 rotors new with rides- Shimano Saint Rear Shifter 10spd.- Shimano 10 speed Dura-Ace cassette- MRP G3 chainguide- KMC 10spd chain new with rides