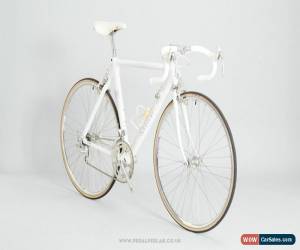 52.5cm Kestrel 4000 Carbon Spectra Classic Carbon Road Racing Bike Vintage a,a:hover,a:active,a:visited {color:#0d93d7 !important} 52.5cm Kestrel 4000 Carbon Spectra Classic Carbon Road Racing Bike Vintage The bike that started the carbon revolution, the most influential bike of the past 30 years, the bike that changed it all. Have read around online and you'll find these quotes written about the Kestrel 4000. They're not wrong.Patented in 1991 by Brent J. Trimble, this was the 1st commercial example of composite carbon fibre bicycle frame. Produced in 1986, and finally launched for the 1987 season, this really did take the cycling industry by storm. Officially brought to us by Cycle Composites Inc, the company set up by Trek founder Bevil Hogg and Tom French to help commercialise the genius of Trimble’s designs, but under the name of the Kestrel 4000. It really did change it all.By 1987 it was on the cover of every cycling magazine and beyond. The use of carbon fibre wasn't particularly new to cycling by this point, with examples dating back as far the 1970s, but never before had we seen one-piece carbon frame, especially one that looked so futuristic.Like it, loathe it, or simply think it's 'OK', you cannot deny the Kestrel it's crown. It really is piece of cycling history.Our example is from 1990, towards the latter end of the 4000s production, which ended in 1992. Kitted out with Campagnolo Croce D'Aune parts, including the iconic Delta brakes.The parts are in excellent condition throughout, the frame does have chips to the paint as you can see in the photos, but the paint on these frames was prone to this. It's been fully stripped re-built in the workshop by our skilled mechanics but originality has been preserved. It's ready to ride away, but this is one for the collectors, surely. OVERVIEW:Seat Tube (ctc):52.5 cm (54.5 cm ctt)Top Tube: (ctc):55 cmHead Tube:122mmStandover:78.5cmWeight:TBC kgTubing:Carbon Fiber Steel 1" Threaded Fork Country:USAYear:1990