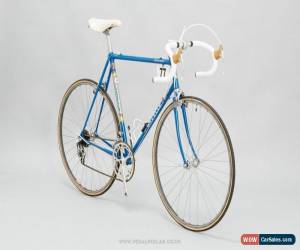 57.5cm J.P Van Poppel's Vintage Gazelle Champion Mondial L'Eroica Retro a,a:hover,a:active,a:visited {color:#0d93d7 !important} 57.5cm J.P Van Poppel's Vintage Gazelle Champion Mondial L'Eroica Retro What an honour.This right here is Jean-Paul Van Poppel's very own team bike from his time with the amateur Gazelle-Vredestein-Campagnolo team of 1983/1984.Van Poppel, one of the most fierce sprinters of all times, became pro in 1985 for Team Skala, and went on to win points classification in the Tour De France just few years later in 1987.The bike came with the number 77 race plate, it's been cleaned polished throughout but it remains pretty much original to the condition we got it. There is some damage to the front end, with little bit of rippling underneath the down tube and some flaking of paint near the top tube internal cable routing as you can see from the photos. Most-likely crashed by the man himself, but otherwise the paint parts are in amazing condition. Given the crash damage it's obviously one for the wall, which is where it belongs really, it's genuine show-piece and genuinely one of kind.Obviously the price tag is high, but this is very special bike and if there was no crash damage it would have to be twice the price, so it has been taken into consideration.Check out the photos below or give us call to arrange to see it in the flesh as it doesn't currently live in our London shop. OVERVIEW:Seat Tube (ctc):57.5 cmTop Tube: (ctc):56 cmHead Tube:160 mmStandover:82 cmWeight:9.6 kgTubing:Reynolds 753Dropouts:CampagnoloCountry:NetherlandsYear:1983/84