Do you like this bike?
Bianchi TSX Mercatone frameset - NOS ! (with some storage marks) for sale
Current customer rating: 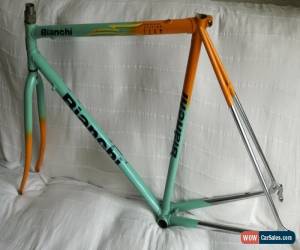 Up for sale is unique 1998 Bianchi Marcatone Uno frameset consisting of TSX lugged steel frameset and in NOS condition !.

This frameset is in NOS condition and have barely visible traces of storage. Everything look new paint, chrome, decals, threads, front and rear dropouts, etc...
To be perfectly clear this frame has not been restaured this is how it originally was. It is made out of Columbus TSX tubing. "Columbus TSX was first produced in 1986 and was still in production in the late '90s so it is no surprise it was used on this frameset" (to quote an expert ;) sporting the Mercatone livery (1998-1999). This framset is therefore quite unique.
And... it's new!

It does have few scuffs, swirls and marks stemming from storage, handling and the fact that it was assembled and exhibited in showroom.
This frame is replica of the one Pantani rode on his legendary victories on the Giro d'Italia and Tour de France in 1998 remember the mythical ascent of Les Deux Alpes?

"Pantani’s legend is full of amazing feats, but his greatest moment was in the cold, pouring rain from Grenoble to Les Deux Alpes during the 15th stage of the 1998 Tour de France" (Extracted from The Hardmen: Legends of the Cycling Gods, by The Velominati).
Frame size is "Bianchi" 53 with top tube measuring 53cm (c-c) and seat tube measuring 52cm (c-c).