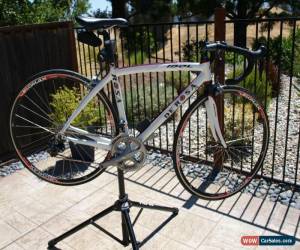 Used De Rosa Idol Carbon Road Bike 49.5 cm Dura Ace 7970 Di2, with an Easton Velomax Circuit Wheelset...  Excellent Condition. Minor scuffs and scratches from normal use, No Cracks or Carbon Damage. Includes (1) Battery Charger.
De Rosa IdolThis is top tier bike from the (2004to 2011’) period. It was typically outfitted with top of the line Shimano DuraAce 7800 components. These components were Very Expensive to manufacture aswell as Extremely Light and even more Dependable – built of Titanium and HighGrade Aluminum Alloy. The Di2 currently installed on these frames was releasedin 2012, and if this De Rosa Idol Frameset had been manufactured just fewyears later, it would’ve been outfitted with the Dura Ace 7970 Di2 System, orCampagnolo Record EPS… Before Shimano released their firstand ‘Best” Di2 Groupset, there was extensive testing as they were not onlyintroducing Di2 but also Carbon/Titanium. They were under big pressure, becausetheir previous lines were so outstanding and dependable. The 7970 system hasproved to be so successful and dependable, that many team riders still ride (10spd. 7970). If you want to damage this system you’ll need to store it outside,yr. round; crash hard on the rear derailleur; tear the connections; or trashthe shifters. It’s hard not to like this system, it just keeps doing what'sexpected, and the battery seems to last forever.  I removed the 7800 components and then added afully tested 2012 Dura Ace Di2 Carbon/Titanium Component System. havethe SM EC79 Electrical Checker. When Di2 first appeared, many team riders wereskeptical; but, the system soon proved itself. And, most serious riders whotried it, then fell in love with it – most have not moved back to mechanical...This is the way the De Rosa Idol frameset was meant to be enjoyed; but thetechnology came after these particular top tier racing machines. The De RosaIdol is state of the art road racing machine, and deserves Shimano’s Dura Ace,Campagnolo’s Super Record, or Sram’s Red… It’s like arguing Ferrari,Lambourgini, Porsche Carrera.These systems were sold in thethousands, yet one is hard pressed to find complete system or rear derailleuron eBay. If you do, be prepared to pay premium. People who have it are toobusy riding it. Even when they crash or destroy part of the component system,they tend to resist parting it out. just put the Teams together, so theaverage rider could see what it feels like to be riding the 'Best of the Best'.If these frames were built few years later, this is how they would've beenoutfitted.
Frame: Road Bike, (Carbon)
Size: 49.5 cm
Top Tube 52.9 cmSaddle: Specialized Body Geometry Lithia Saddle (women's) Can Swap Out with Men's Saddle if NeededStem: Ritchey
Handlebar: Ritchey Comp
Setpost: IntegratedBrakeset: Ultegra
Wheelset: Easton Velomax Circuit